I am working with the National Center of Biblical Parenting to help promote a new book by Dr James D. Dempsey titled Parenting Unchained: Overcoming the Ten Deceptions That Shackle Christian Parents 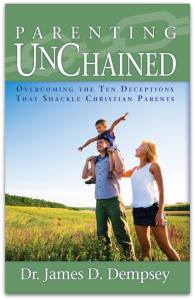 Here is a little bit of how this book came to be from Dr. Dempsey himself…

“I want to give you just a little background about the book so you can appreciate how God leads us even when we don’t know we need leading.  For nine years the book sat 90% finished under the working title of “The Ultimate Father Figure.” Over those nine years, I had to undergo a radical change to my approach to parenting because of my arrogance. God has ways to humble us, and mine was through my children as they grew up and left for college.

My wife, Gail, and I first heard Scott and Joanne in January of 2008, and we recognized immediately that we’d pursued a behavior modification approach to parenting and were seeing the predictable results. In September of 2013, I took the time to re-write the book using much of what we learned through our exposure to the National Center for Biblical Parenting.  I sent it to Scott and asked him to read it and give advice. He had kind words for it, and mentioned his three-fold test for books. Mine passed the first two, but he said it fell short in the third test: It was ‘not compelling.’ In his words, what would compel someone to pick up my book rather than the scores of parenting books out there? I was so glad to get his feedback because that set me on a course to make the book compelling (or at least more so.)

Almost overnight, and simply by asking God, the Lord gave me a new approach to the book, changing it from giving ten Biblical principles for parenting to sharing the ways Satan deceives Christian parents by trying to hide these ten principles.  I thought the re-write would take months, but in one weekend, it came together miraculously as Gail looked on in amazement.  She says she had never seen me write so fast and with such purpose.”

And here is a little bit more…

You’re an author. Can you tell us about your book?

The book’s title, Parenting Unchained, reflects the freedom that parents can experience IF they understand the way Satan tries to deceive them. You can’t avoid the pitfalls you don’t see!

What was the motivation for writing the book?

I felt that the Bible has much more to say about parenting than the few verses that speak specifically to parents. I saw in God’s interaction with the nation of Israel, and in Jesus’s interaction with the disciples, many great lessons on how to parent, so those lessons are explained. But most of all, I want Christian parents to avoid the parenting mistakes I made so that Christ becomes real to the next generation.You are self published.

I was blessed to be able to publish under the banner of the National Center for Biblical Parenting, so in some ways the process was similar to traditional publishing. Working with them gave me the ability to put their logo on the spine, which brings credibility. They provided the cover artist and interior designer, plus advice on formatting. Dr. Scott Turansky of the NCBP provided the ‘tough love’ editing I needed to improve the book. I’m very grateful to him and proud to be associated with the NCBP.

What will we learn in your webinar?

Because churches need to involve and train parents, I try to promote close interaction between parents and children’s ministry workers. Participants will learn essential attitudes and actions kidmin workers must cultivate in order to involve parents. You have to make these connections and build relationship before you can train them.

Who should register for your webinar and why?

Anyone involved in children’s ministry, including senior pastors, children’s ministers and teachers will benefit. Parents are the key to developing the next generation of spiritual champions, so we need to connect with parents and form partnerships with them. A great way to start is to get them involved in the ministry to children at church.

If you have any more question to ask Dr James D Dempsey feel free to ask them in the comment below or email me at nicolelhvaugh@yahoo.com if you want to keep your identity between me and you 😉

You can also join Dr. Dempsey on Thursday December 11th at 9pm for a Parenting Unchained Facebook Party 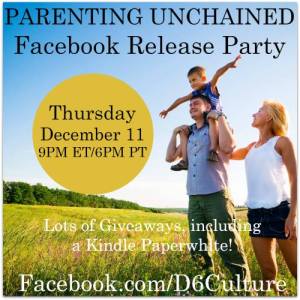 And beginning Monday Dec 8th through Dec 12th you will be able to purchase the ebook/kindle version of Parenting Unchained for a whopping $o.99 on Amazon!