So David sent and inquired about the woman. And one said, “Is this not Bathsheba, the daughter of Eliam, the wife of Uriah the Hittite?”

As I researched the name of Bathsheba, what I learned was that her name meant, daughter of an oath.

From the knowledge of this definition of her name, I found myself researching oaths in Scripture…

This is the word which the Lord has commanded. If a man makes a vow to the Lord, or takes an oath to bind himself with a binding obligation, he shall not violate his word; he shall do according to all that proceeds out of his mouth.

The whole chapter of Numbers 30 teaches us how God feels about oaths, about vows, about promises that we make with the words of our mouth. I encourage you to read the whole chapter because these are the statutes which the Lord commanded Moses, as between a man and his wife, and as between a father and his daughter, while she is in her youth in her father’s house (Numbers 30:16).

In the New Testament, in the book of Matthew when we read the ancestry of Christ, in the English translation we read…

David was the father of Solomon by Bathsheba who had been the wife of Uriah.

However, in the original language Bathsheba’s name is not written, it simply reads, David moreover begat the Solomon out of the one who had been wife of Uriah…

When I researched the definition of Uriah’s name I discovered that it meant, the flame of God.

David’s name comes from the Hebrew word dod which means beloved or love.

out of the Flame of God {And there appeared to them tongues as of fire distributing themselves, and they rested on each one of them. 4 And they were all filled with the Holy Spirit (Acts 2:3-4), The Holy Spirit will come upon you, and the power of the Most High will overshadow you; and for that reason the holy Child shall be called the Son of God. (Luke 1:35)}

And I will put enmity
Between you and the woman,
And between your seed and her seed;
He shall bruise you on the head,
And you shall bruise him on the heel.

Bringing it now back to Bathsheba… the daughter of an oath. There have been many who have tried to condemn Bathsheba in this predicament of David’s. Yet I see nothing in Scripture where God condemns her… as a matter of fact God never gives ownership of her to David… always in Scripture she is the wife of Uriah.

David sent messengers and took her, and when she came to him, he lay with her; and when she had purified herself from her uncleanness, she returned to her house.

David took her. She did not come a calling. It appears to me that he took her against her will and raped her. We see clearly in Scripture that she grieved over this transgression. We see her unwilling to cover for David and allow him to not be held accountable for what he did to her.

The woman conceived; and she sent and told David, and said, “I am pregnant.”

Now when the wife of Uriah heard that Uriah her husband was dead, she mourned for her husband.

The word for mourned in this verse is saphad and it means to tear the hair and beat the breasts; generally to lament; by implication, to wail — lament. Bathsheba was a broken woman and she was broken by the hands of David… who would now take responsibility for her and God would redeem this crazy twisted mess through the son of Bathsheba, the daughter of an oath, would have a son who would be the one who would carry the oath of the Son of David who would be the very Son of God, Jesus the Messiah.

Bathsheba was a woman who held on to an oath and was not afraid to call a king on it. As we look at the wives of David, she is the only wife who ever walks into David’s chamber and demands he keep his word. She did it respectfully… but she indeed did it.

So Bathsheba went in to the king in the bedroom. Now the king was very old, and Abishag the Shunammite was ministering to the king. Then Bathsheba bowed and prostrated herself before the king. And the king said, “What do you wish?” She said to him, “My lord, you swore to your maidservant by the Lord your God, saying, ‘Surely your son Solomon shall be king after me and he shall sit on my throne.’ Now, behold, Adonijah is king; and now, my lord the king, you do not know it.

She was daughter of an oath… and oaths were meant to be kept. As we consider Bathsheba, the wife of Uriah, in the lineage of our Christ as we look at this candle of hope in Advent… what I see is that she is a another picture of Romans 8:28

And we know that God causes all things to work together for good to those who love God, to those who are called according to His purpose.

I can’t imagine the hurt this woman experienced as she was taken by the highest authority in her land, conceived a child through a sexual encounter, had her husband killed by the one who took her, then looses the life of the child because of the sin of the one who took her… how she must have felt like a powerless pawn in the hands of man.

Yet, at the same time I see a woman filled with the hope of the knowledge of an eternally good God. One who knew oaths were meant to be kept and God Himself watched over them… this was her hope and this is our hope. God’s Word is true…

Forever, O Lord,
Your word is settled in heaven.

We will see this even more next week as we look at our next candle in the Advent wreath… the Candle of the Way. 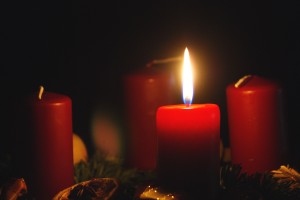