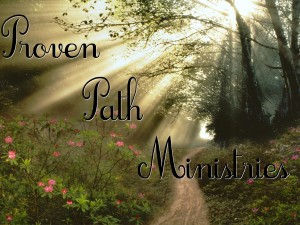 When you step into a journey of the unknown I have learned it is very easy to lose your way. As I pondered how to describe this step I thought of an experience I had back in October. Our girls are in theatre. I usually always help backstage in some way. In theatre the lights go out because the scenes must be changed in the dark.

On one particular show day I had to leave in between shows for a doctor’s appointment. I stepped back into the backstage area at the exact moment that the grand was being pulled open for the first scene. When I rushed on stage to do the scene change my eyes had not yet adjusted to my new environment. I was blind and useless. I had to stop where I was and not move and close my eyes and allow my self time to adjust in order to find my way again. It took until the next scene change before my eyes were ready because I had stepped backstage from a beautiful sun shining day.

Sometimes this journey of life is like my theatre experience above. Sometimes God throws us into a new environment within a familiar environment and we can find ourselves in a panic in our new unknown. Everything comes to a standstill in our spirit and we feel paralyzed and blind. In that moment it is easy for fear to grip our hearts.

I have also learned that the adjustment from seeing in the light to seeing in the darkness takes much longer the brighter the previous light, and it’s definitely  much harder to go from light to darkness than it is from darkness to light.

I know that in this new environment of ours, an environment absent of those who have NEVER been absent from our life, has placed us on a journey we never thought we would be on. We have gone from being in their light to a darkness that we have never experienced before. The Spirit has reminded me of John 5:35-36 and how the disciples of John must have felt when he was taken away from them.

Everything we thought would be, no longer will be, and although we are walking in familiar territory, darkness has fallen on the land, because the familiar is now no longer familiar. It has changed. The future plans dreamed and prepared for are gone.

It is here where vision can be lost.

I know I lost sight of mine. I really just wanted to curl up in the fetal position and throw in the towel. In one moment everything that you thought was, now isn’t; and everything, every, thing, is now unfamiliar territory, even the mundane simple routine things of life.

In the book of Mark there is an interaction between Jesus and a blind beggar named Bartimaeus. In Mark 10:46-52 this man heard the voice of Jesus and began crying out to Him. Jesus stopped and told His disciples to call him to come to Him. Bartimaeus threw aside his cloak and jumped up and came to Jesus. When Jesus asked him what he wanted from Him, Bartimaeus said, “Rabboni, I want to regain my sight!”

The fact that he said he wanted to regain his sight implies that at one time he could see. He too was in familiar territory that now was made unfamiliar by the presence of darkness that his eyes (physical and spiritual) just simply could not adjust to. As I read this, and listened to Phil Waldrep teach on this passage of Scripture last month, in the margin of my Bible I wrote, “I need to regain my sight”

I realized that not only was I grieving, but I had entered a journey into the unknown with my once known gone. I was in new territory. I had just had the lights turned out on me and I was on a familiar stage in the midst of a scene change but I was blind and useless. I was trying to go throw the routine motions because in my head I knew where everything was supposed to go and be, but really I was a mess, and was going to make a mess if I did not stop and stand still and give my eyes time to adjust.

In November, my husband and I snuck away to the beach alone. While there, in the stillness, separated from the regular routine of life we were able to reconnect with our God and with one another. I have been stuck on my Exodus Part Two book since my Daddy took a turn for the worse in January and while at the beach God gave me two devotions for this book. This renewed my spirit to finish it, not just Exodus, but the entire series.

Also one night while waiting to eat, my husband and I were sitting out on the deck of a restaurant holding hands just talking, and this group of older men turned the corner and one of them said, “Well aren’t you two just the cutest couple we have seen here all week.”

Then, while at the beach, my husband won tickets to our home state ultimate college football rivalry game, The Iron Bowl. We were home from the beach for a week, then we had Thanksgiving, which was so VERY HARD for us and then the next day we left for Auburn.

We parked and walked almost two miles to the stadium, While walking to the game we stopped at the infamous Tiger Walk to see the players and while standing there we had a couple come up and say, “We have been behind y’all watching y’all walk for a while and we  just wanted you tell you that you two are the cutest things!” 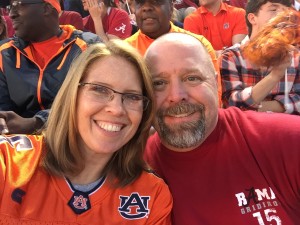 Then a friend had gifted us with some Titan tickets several months ago, which just happened to be for the game following the Iron Bowl. It just happened to be pouring down rain for this game, and my body and cold and rain simply do not get alone. We also had another mile walk to the stadium. On the walk my shoe came untied and my husband bent over and tied it for me. We walked a little further and lo and behold the OTHER shoe came untied and once again he bent over to tie my shoe. While he was tying my shoe this lady comes up and pats us on the back and says, “Now that’s true love right there!”

Then we got to the stadium and as we were walking to our seats, which would have had us sitting in the rain, this man stopped us. He asked us where we were sitting and then asked if we wanted to stay dry? He had two extra club seating tickets that he wanted to give us as a gift. We were hesitate at first to accept them, thinking this had to be a racket, but it wasn’t. It was simply a kind gesture. We walked into a carpeted area with leather seats and big screen tv’s and indoor concessions. It was nice and it was dry. 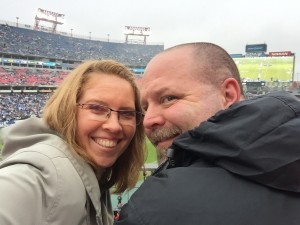 What did all these comments and experiences mean and how did God use them to restore my vision?