Jesus said to him,

no one comes to the Father but through Me. 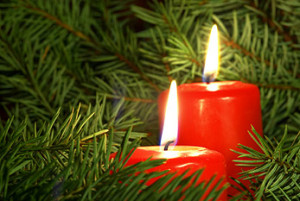 The beautiful purpose for this candle is to remind us of all the prophets who proclaimed that the way of salvation would come through God through One. From the beginning the promised seed was a singular seed… their would always be only one one Son. The eyes of the people of Israel and the eyes of every people that had ever heard of the promise were always watching for the One.

There has never been many ways to the Father… their has always only been One.

To Adam and Eve came the promise of a seed…

Through Shem and his wife the promised carried on…

To Abram and Sarai the blessing was bestowed and the promise of a son of promise was given, and by faith they believed and were made new and given new names to illustrate their faith, Abraham and Sarah… when their bodies were dead out of death God would bring forth life… and Isaac would be born. Abraham would be known as the friend of God.

To Isaac and Rebekah- To Jacob and Leah… it’s funny, to this day I am still perplexed that the promised seed of God would carry through the youngest son of Leah, the wife that Jacob hated and was deceived into marrying… by human standards you would think surely it would be the first born of Rachel, the wife that Jacob loved all along, but God doesn’t do much of anything according to human reasoning and understanding… does He.

To Judah and Tamar- a woman unwed… a single mother as we would call her in our day, would carry this promised seed through their son Perez…

To David a covenant would be made that from him would come the Son who would rule over not all of Israel, but over all the world… from him would be born the King of kings and the Lord of Lords. The promise of this son would be carried through the womb of a woman that David would be the picture of David’s lowest point in his life… a moment that would change the course of his life and the life of his family forever… Bathsheba, the wife of Uriah… Solomon would lose the majority of his father’s kingdom because of his hunger for sin and it would only be the promise of God to his father and his father’s fathers that would sustain the hope and life of this people of God.

What would be the way? How would they know? Would they recognize the King? How long will it be?

But as for you, Bethlehem Ephrathah,
Too little to be among the clans of Judah,
From you One will go forth for Me to be ruler in Israel.
His goings forth are from long ago,
From the days of eternity.”
Therefore He will give them up until the time
When she who is in labor has borne a child.

Therefore the Lord Himself will give you a sign:

Behold, a virgin will be with child and bear a son,

and she will call His name Immanuel

There would be 400 years of silence to the people of Israel. The prophets would stop… but the promise would remain.

Then one day, when many in Israel where no longer looking, when priests and scribes had decided to come up with their own way to salvation… There would, in this day, be born the One, this Immanuel, God with us, to a young virgin girl named Mary… and this One would rock not just the nation of Israel, but the entire world, and not just for a time… but for all eternity!

The seed of promise was here! The way of salvation had come. Here He was this little child, laying in the arms of a woman who would care for Him and be smiled upon by a man named Joseph who would protect Him as his own son. They would guard Him, this treasure in a jar of clay, with their very lives… to only watch Him one day bear their own sin on His this body on a cross on a hill called Calvary…

Remembering that unless that seed dies… it cannot bring forth life.

The enemy of the promise thought he had won… after all he had watched the seed of promise pass from father to son for thousands of years… he had tried for ages to destroy it… but had never been able to succeed… and now finally he had done it!

This seed of promise was dead… with no son to carry on the promise… so the enemy of the promise thought.

The enemy didn’t catch that unless the seed dies it cannot bring forth life… the sons that would be born of this seed would not be according to the flesh.

His death would be the way of salvation for all who would believe.

But this I admit to you, that according to the Way which they call a sect I do serve the God of our fathers, believing everything that is in accordance with the Law and that is written in the Prophets; having a hope in God…

no one comes to the Father but through Me.