WOW! Here is the last post of the section of Romans that we have titled The Scope of Salvation!

25 For I do not want you, brethren, to be uninformed of this mystery—so that you will not be wise in your own estimation—that a partial hardening has happened to Israel until the fullness of the Gentiles has come in;

26 and so all Israel will be saved; just as it is written, “The Deliverer will come from Zion, He will remove ungodliness from Jacob.”

27 “This is My covenant with them, When I take away their sins.”

29 for the gifts and the calling of God are irrevocable.

30 For just as you once were disobedient to God, but now have been shown mercy because of their disobedience,

31 so these also now have been disobedient, that because of the mercy shown to you they also may now be shown mercy.

32 For God has shut up all in disobedience so that He may show mercy to all.

33 Oh, the depth of the riches both of the wisdom and knowledge of God! How unsearchable are His judgments and unfathomable His ways!

34 For who has known the mind of the Lord, or who became His counselor?

35 Or who has first given to Him that it might be paid back to him again?

36 For from Him and through Him and to Him are all things. To Him be the glory forever. Amen.

We have just learned in Romans 11:1-24 how God is able to graft Israel back in again if they believe. What we are shown again in Romans 11:25-32 is that this was God’s plan all along.

What does he not want us to be uniformed about?

What is this mystery? Look up and read Matthew 13:11-17 and Ephesians 3:1-10 to find out. Use what you read to answer True or False to the statements below.

______ Jews were hardened so Gentiles could hear

Read Romans 11:25 again. How long will the hardening of Israel last?

Read Romans 11:26. What will happen when the fullness of the Gentiles comes in?

Before or After — Jesus came to the earth

Before or After — Jesus died on the cross

Before or After — Jesus rose from the dead

Before or After — Israel disobeyed God

Before or After — God brought them out of Egypt

Read Romans 11:28. Did God stop loving Israel because they did not believe Jesus when He came the first time?

Read Romans 11:28 again. For whose sake did God allow Israel to become enemies of the gospel?

Does the gospel mean that God isn’t going to keep the promises He made before Jesus died on the cross?

Read Romans 11:29. What do you learn about the gifts and calling of God?

That’s a BIG word isn’t it! Do you know what it means? In the Greek this word is ametamelétos and it means not to be repented of, about which no change of mind can take place, not affected by change of mind.

Have you ever had someone give you something and then come back later and say they wanted it back? How did that make you feel? Not good I bet.

Well this word, irrevocable, means that once God has said it, once God has given it, He doesn’t take it back. Not ever.

Read Romans 11:30-31. Fill in the blanks to complete the verses and answer the questions below the verse with either Jew or Gentile.

but now have been shown mercy because of _______  disobedience

Read Romans 11:32. Who has God shut up in disobedience?

Why has God shut us all up in disobedience?

Look up and read Galatians 3:21-29. Answer the questions below.

Why did the Scriptures shut everyone up under sin?

What is the purpose of the Law of God?

Who can be saved through faith in Jesus?

Paul concludes these first eleven chapters of Romans with this awesome praise to God. If you have made it through this study you have studied some of the hardest passages in the Bible and also some of the most important. Romans 1 through 11 lay out the full doctrine of salvation.

Paul then concludes these chapters with a reminder to us that we don’t have to understand it all. We just need to trust God. We need to remember who He is.

We are also reminded by Paul that God does not owe us anything, so we need to be thankful always. Below is a U shape. Use this U shape to help you understand Romans 11:33. 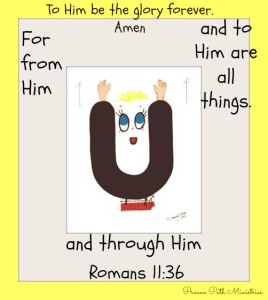