I am playing catch up today because we have had a crazy weekend and some sickness at our house. Before Alex got his official Autism diagnosis, I had not only started researching different diet options, but I also started looking for different therapy options.

We chose Applied Behavioral Analysis as the route we would go with Alex’s therapy. This type of therapy is designed to help with the child’s social skills, communication, academic, reading, fine motor, dressing, eating, potty training, etc. There was only one problem when we decided to go this popular route – COST!!

The number of hours recommended for ABA therapy each week was between 20-40 hours. At the time, insurance didn’t cover any of the therapy. To do a comprehensive program where therapists would be provided, the cost would range from $1000-2000 per week (and sometimes more). Needless to say, we didn’t have that kind of money, so that wasn’t an option. However, I was very lucky because I was able to talk to the wonderful lady who wrote one of the books I read about Autism, and she lived in Middle Tennessee. We were able to hire her for for around $4,500 for a year, and she would develop “programs” for me to do with Alex, and she trained me so that I could do the therapy with him. Erik and my parents also took time to do therapy sessions.

I learned over time that some people don’t like this type of therapy because they compare it to training a dog. You use a lot of repetition along with positive and negative reinforcements. But, the fact is our children on the spectrum do learn through repetition. Our consultant would set up programs for “Attending”, and then there would be trials such as “look at me” and “wait”. I would use that throughout the session. Then, there would be a “Imitation” program where the trials would consist of waving with a certain hand, clap hands 3 times, build the same figure out of blocks, etc. We would have a “matching” program where a trial would be “put with same”, and he would match Verb flash cards, Emotion cards, etc. And the list goes on and on. For each “trial” within each program, we would do it 10 times. I would have worksheets to fill out for each trial. Then, our consultant would come weekly to observe and see how we were doing.

Alex responded very well to this type of therapy. I will not say it was easy. It wasn’t. The actual therapy isn’t really that difficult, but it is just the time that it takes. I had a 6 month old, and I sat him in the room with us while I would work with Alex. Then, at what I thought was the most difficult time in our lives, I found out I was pregnant with Annika at the same time Alex was officially diagnosed. I quickly learned that God truly does work in mysterious ways. After all of our trouble conceiving before we adopted Alex, he gave us two back to back surprises. I always thought he was probably looking down on us and having a good old laugh!!! 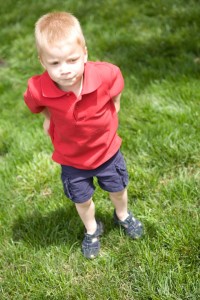 I have to smile at Andrea’s last paragraph. I know several families that could never conceive a child and so they decided to go through adoption… and then after the adoption they became pregnant!

I have no doubt that God knew Alex was to become Erik and Andrea’s and if they had of conceived Lincoln and Annika first… they would have never even considered adoption… and where would Alex be?

For I know the plans that I have for you,’ declares the Lord, ‘plans for welfare and not for calamity to give you a future and a hope.