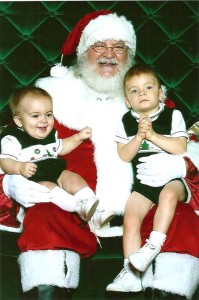 When I realized Alex had Autism, I dove into researching everything I could find about it. I was very angry and sad, but I used those emotions to fuel me as I read all of the books I could find and searched on the internet.

I think most parents would be willing to do ANYTHING within their power to pull their child out of the grips of this Autism monster. That is what we do. That is our job. The problem with Autism is treatment is extremely expensive – out of reach of most of us that don’t have the amount of money someone like Jenny McCarthy has.

Before I looked into different types of therapy, I decided to start with a least costly option first – Alex’s diet. In September 2007 (one month after we figured out what was going on), I started Alex on a Gluten Free Casein Free diet. If you are like me, you might not know what Casein is. It is proteins that are found in milk. I admit that I was overwhelmed at first when we changed to this diet. I didn’t realize how wheat and dairy are in so many things!!

This diet made a HUGE difference in Alex! It doesn’t affect all kids with Autism the same way, but Alex is one of those kids that truly benefits from this diet. Before going on the GFCF diet, Alex was drinking close to a gallon of milk every two days – he was constantly asking for milk. He also ate a LOT of yogurt. He was getting terribly constipated, and when we put him on this diet, it got much better.

The amazing thing about this diet was the effects it was having on his mood and his speech. Before going on it, he only spoke one or maybe two words together. Within 2-3 weeks of going on this diet, he started putting more words together. We learned that milk often has the same effect as heroin with Autistic kids. They crave it, and it creates this fog in their brains. The changes we saw were amazing!!!

I have to admit that we haven’t been the best about sticking to this diet since Alex’s cancer diagnosis. When he was in treatment, we just wanted him to eat something to keep a little weight on, so we did get off of the strict diet. But, we are working our way back to it because we know how well he responds to it. I know it is overwhelming to a parent as you start thinking of doing this diet, but I would encourage you to try it. You never know how it will effect your child!