Today my two youngest girls will have their full dress rehearsal for the College Street Players production of Willy Wonka. Yesterday was my first opportunity to see the show in full run through. Up to yesterday I had only had the opportunity to view the scenes my girls were rehearsing, but last night the entire cast was able to sit and be the “audience” for the run show dress rehearsal.

So just as I do anything I see with my eyes or hear with my ears I began filtering the production through my biblical understanding.

The play begins with giving the viewer a clear picture of the poverty of the bucket family according to worldly measures… but you also see the contentment in this family as they place their true wealth not in worldly gain, but in their family and love and respect for one another.

If we have food and covering,

As the play unfolds you will also see that no matter what disappointments or opportunities comes the Bucket’s way, they continue to lovingly remind one another to focus on the riches of family and they choose to rejoice in what they have instead of wollering in the misery of what they do not have. The character of the family is not based on accumulating more… their decisions are not based on their love of money, but on their love for one another.

Make sure that your character is free from the love of money,

for He Himself has said,

“I will never desert you, nor will I ever forsake you,”

One of the key songs in this production of Willy Wonka is the Bucket family motto and we hear them sing, “think positive…”  Now I am not a proponent of the whole positive thinking movement. I don’t believe we can think something into happening to fulfill our own selfish desires. I don’t buy into the name it and claim it of popular hype in christendom… but I do believe that we must cast down any thought that is not in accord with the Word of God (2 Corinthians 10:5) and we are to dwell on the truths of God and not the lies of the world.

Finally, brethren, whatever is true,

whatever is of good repute,

if there is any excellence

and if anything worthy of praise,

dwell on these things.

Now as we watch Charlie’s hope begin to waver as he watches one kid after another reveal their golden ticket to the world we see the “Candy Man” ask Charlie to retrieve something for him… and then we see the “Candy Man” offer Charlie the newest greatest Wonka Bar… and then we see him encourage Charlie to go ahead and have a bite now… and before Charlie opens it we hear him sing his Bucket family motto as he digs down deep and hopes against hope that maybe, just maybe, this time he will peal back the layers of paper and discover a beautiful golden ticket wrapped around that chocolate bar.

Much to his amazement… there it is! He has the last Golden Ticket! But it was not the power of positive thinking that delivered that ticket into his hands… it was the intervention of the one who knew his heart and had the power and authority to put that ticket in his hands.

Every good thing given and every perfect gift is from above,

coming down from the Father of lights,

with whom there is no variation or shifting shadow.

As you meet Charlie you also meet the other golden ticket discoverers. You will meet them one by one. Oh my, let me tell you they are a handful. I could break down the character of each of these, but I believe they will be clearly portrayed in the show. Selfishness, disrespect, greediness, unruliness, its just plain nasty and nasty is always easy to spot. The bottom line is that these characters are kids that have had their fleshly desires fed and fed and fed and fed. Their is no restraint given to them or expected of them.

There is a clear distinction between the character and integrity of the Bucket family as opposed to the families of these other Golden Ticket holders.

The one who is taught the word is to share all good things with the one who teaches him. Do not be deceived,God is not mocked; for whatever a man sows, this he will also reap. For the one who sows to his own flesh will from the flesh reap corruption, but the one who sows to the Spirit will from the Spirit reap eternal life. Let us not lose heart in doing good, for in due time we will reap if we do not grow weary. So then, while we have opportunity, let us do good to all people, and especially to those who are of the household of the faith.

In the play we child after child show their true colors more and more as they are faced with the objects of their desire… Their greatest temptation is faced before all of them and they succumb every time… even Charlie.

Charlie faces the fizzy lifting drink… could the object of Charlie’s desire be to be lifted up out of poverty? Could it be that he desires to have the freedom of provision that he sees so many others abusing? I think maybe so… yet here lies the test… how will Charlie seek the fulfillment of this desire?

As we see the fizzy lifting drink temptation of Charlie… we see that it is a test placed before him by Willy Wonka himself. What on earth would Charlie do when or if he chooses to fulfill a legitimate desire in an illegitimate way? What would he do if he failed?

Would he hide it?

Would he deny it?

Would he lie about it?

Or would he own it and reveal it and confess it and ask forgiveness for it?

As the play progresses you will see that these children do eventually reap what they have sown… Charlie reaps an eternal inheritance that can be passed from one generation to the next, one that he can share with the world, and he gets an even larger family as he now is entrusted with the care of Mr Wonka’s beloved Oompa Loompas… and well the others get all they are going to get in this life, a lifetime supply of chocolate.

Truly I say to you, they have their reward in full.

I highly recommend coming to see the College Street Players production of Willy Wonka (Not just because my children are in it) but because you will see the picture of a family that holds on to hope as they face the trials of this life. You will see the contrast between a family that places its wealth in integrity, honesty, love, respect, and hope as opposed to families that place their wealth in the ability to meet the selfish desires of their flesh.

May we learn from the example of the Bucket family and choose to be content with what we have and yet still hold on to the hope of a better day ahead. 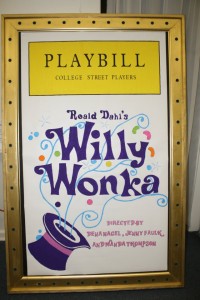