I am reviewing another book by Gregory Brown from his Bible Teacher’s Guide collection. This book focuses on Ephesians 6:10-20. 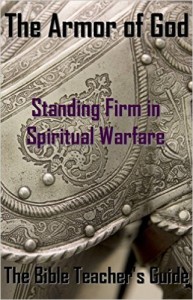 “In The Armor of God: Standing Firm in Spiritual Warfare, you will learn how to stand against the enemy’s attacks— protected by the full armor of God. This Guide can be used as a five to eleven week small-group curriculum, depending how the leader chooses to divide the introduction and the ten principles about standing firm. Every week, the members of the group will read a chapter or more, answer the questions, and come prepared to share in the gathering. Each member’s preparation for the small group will enrich the discussion and the learning.” (pg 11)

Brown’s studies are great for a small group. There is no homework involved other than reading the Scriptures involved and a short chapter. Each chapter concludes with four to six “reflection” questions to help you apply what you have learned. These questions are also useful for the small group leader in order to help open up the door for discussion each week.

This particular passage of Scripture is vital for all believers to know and understand. I have Ephesians 6:10-20 written out in my bathroom, kitchen, and office. I keep this passage posted before me so that I can always remember who the real enemy is and how I can defeat him. In our lives it is so easy to be convinced that the fault lies with flesh and blood. Satan wants to make those that God called us to serve, love, and share the gospel with our enemies. He is able to easily deceive us if he can keep us out of the Word of God and distracted from prayer.

“Paul talks about spiritual warfare in this final section of Ephesians. In Ephesians 6:10-17, he details the believer’s need to be filled with the power of God, and also to put on the full armor of God in order to stand against the attacks of the devil. The armor of God represents attitudes and actions that believers must practice to win on the spiritual battlefield. It includes the belt of truth, the breastplate of righteousness, the footwear of peace, the shield of faith, the helmet of salvation, and the sword of the Spirit. No Christian soldier can win without them; however, even these are not enough. We must pray in the Spirit.

Prayer is the energy and atmosphere in which we wage war. Believers must live in prayer at all times in order to win this spiritual battle. It is how we are strengthened in the power of God, and it is how we put on the full armor (cf. Eph 6:10-11).”

God’s Word is life. It is light. It is our only weapon to wage war with the enemy of our souls. To properly use a weapon we must be trained in it. We must have experience with it. In order to have confidence and strength with weapon we must know it and know it well.

I  think to many Christians are unaware that Satan knows the Word of God. He has been around it for a while. Just quoting it to him does not deter him in anyway…

But also some of the Jewish exorcists, who went from place to place, attempted to name over those who had the evil spirits the name of the Lord Jesus, saying, “I adjure you by Jesus whom Paul preaches.” Seven sons of one Sceva, a Jewish chief priest, were doing this. And the evil spirit answered and said to them, “I recognize Jesus, and I know about Paul, but who are you?” And the man, in whom was the evil spirit, leaped on them and subdued all of them and overpowered them, so that they fled out of that house naked and wounded.

David defeated Goliath because he came before him in faith and confidence in a weapon with which God had personally well trained him.  Beloved, can you comfortably and confidently wear the armor of God? How well trained are you in the weapons of our warfare?

I received this free for an honest review and amazon affiliate links have been used. Purchasing this study through the links in this post help support Proven Path Ministries.