We continue in our Romans Study For Kids as we finish up Romans 14. Reminder, this study is written with the New American Standard Bible translation.

Read Romans 14:13. With what word does this verse begin?

Now remember when we see a “therefore” we need to ask what the “therefore” is there for. The “therefore” in Romans 14:13 is the closing of what Paul was teaching us in verse 1 through verse 12.

Read Romans 14:13 again. Had the church been judging one another?

What word Romans 14:13 gives us a clue that this was something that they were doing?

To not do something “anymore” means we had to have already been doing it.

In Romans 14:13 we have another key word. Do you remember the word from the Finding Nemo video?

What does Paul instruct us to do instead of judging or despising one another? 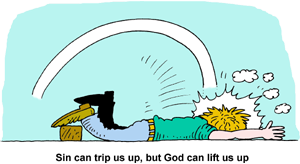 Read Romans 14:14. What is Paul convinced of in Christ Jesus?

Read Romans 14:14 again. We have that very important word again. What makes something that is clean in Christ, become unclean to a Christian?

Read Romans 14:15-17. If you hurt another Christian over what food they eat or what holiday’s they celebrate or what genre of music they listen to are you walking according to love?

Type this link in your URL search bar and watch this video: https://www.youtube.com/watch?v=cuEJ_NQzFaU

That was a clip from one of the songs from the Disney movie Let It Shine. Right after this girl stops singing the song, the Pastor gets up to preach about how wrong rap music is and he humiliates the young girl who is indeed a famous rap artist and singer. He then learns that his son writes rap songs and he is very angry about it.

Later in the movie he takes the time to actually read the lyrics and he apologizes to both the girl and his son. He almost destroyed the work of God over something that God does not call a sin.

Read Romans 14:15 again. What command does Paul give us in this verse.

Read Romans 14:16. If something is not called a sin by God should we call it evil?

Read Romans 14:18-19. If we serve Christ in righteousness, peace, and joy according to what God says is right and we do not destroy one another over things that God does not call sin what does this verse say we will be?

What are we to pursue according to Romans 14:19.

Read Romans 14:19-20. What are we to do in order to be pleasing to God and walk according to love? Circle your answer.

build one another up

tear down the work of God for the sake of food

Read Romans 14:21. If we are spending time with someone who believes something is evil even if we don’t believe it, should we try to get them to do it in order to prove it’s not evil?

Let’s say you have a friend over to play. Let’s say you and the friend go inside to watch a movie or a tv show and that friend tells you they are not allowed to watch a show that you watch all the time. Your parents see nothing wrong with this particular show, but their parents do. Should you tell the friend that their parents are crazy and their is nothing wrong with that show and turn it on anyway. Or should you simply say, okay, and find something that you both are allowed to watch?

What should you do in order to walk according to love?

Read Romans 14:21 again. Are we ever to be the reason why one of our brothers or sisters in Christ stumbles?

Let’s reverse the rolls with the example used just a moment ago. Let’s say that you are over at a friend’s house and they want to watch a tv show that you are not allowed to watch. Let’s say that this is a tv show that almost all the kids at school get to watch, it’s even on the  Disney channel, but you have been told by your parents that you are not to watch it. If you keep silent and watch this program knowing in your heart that it is wrong for you to watch it… does this make your heart happy?

I bet it doesn’t.

If you are not watching this program in the faith that it is okay to watch, you are condemning yourself and sinning against your own conscience because you are doing something that you believe is wrong.

This is what Paul means in Romans 14:22, “The faith that you have, have as your own conviction before God.”

If you have, talk to God about that… and your parents.

That’s enough for today! Tomorrow we dig into Romans 15.