It’s been a while since I wrote a Names of God study post. We have been on spring break at our co-op and last week was our first Monday back. I am in the process of getting back in the swing of things… well actually I don’t think I am ever in the swing of things. I just can’t seem to find a rhythm in life, but that’s okay… well at least I think I am learning that it is okay.

Archiereus, is Greek for High Priest. This is the name/title of Christ that we will be focusing on today.

consider Jesus, the Apostle and High Priest of our confession;

What exactly does it mean that Jesus is our High Priest? Archiereus means chief priest. To dig deeper into the meaning of this word we must break it down.

The first part of this word is arche and it means beginning, origin, the person or thing that commences, the first person or thing in a series, the leader, that by which anything begins to be, the origin, the active cause, the extremity of a thing, of the corners of a sail, the first place, principality, rule, magistracy, of angels and demons.

The second part of the word is hiereus and it means: a priest, one who offers sacrifices and in general in busied with sacred rites. Hiereus‘ word origin is hieros and it means sacred, consecrated to the deity, pertaining to God, sacred Scriptures, because inspired by God, treating of divine things and therefore to be devoutly revered

Now we know the definition of the word… but, still what exactly does it mean to be the High Priest?

The first high priest we meet in Scripture is in the book of Genesis. His name is Melchizedek.

And Melchizedek king of Salem brought out bread and wine;

now he was a priest of God Most High.

What we must note about this Melchizedek is that he was both a king and priest. The only time in Scripture when these two offices are held by the same person. Any other time in Scripture if a king tried to play priest… it never worked out. The office of priest was to be respected and it was sacred. We see Saul lose the throne for his entire family line when he chose to not wait on Samuel. We see Uzziah struck with leprosy when he takes upon himself to burn incense on the altar… God takes the position of priest very seriously.

So this Melchizedek is a small glimpse in the Scriptures of one who is both king and priest. One that I believe to be a theophany of Jesus Christ.

To learn more about the office of high priest we continue through the Old Testament. Aaron was the first high priest of the nation of Israel. As we study through the books of Exodus and Leviticus we discover what exactly was required of the high priest.

We see that he wore special garments:

Then bring near to yourself Aaron your brother, and his sons with him, from among the sons of Israel, to minister as priest to Me—Aaron, Nadab and Abihu, Eleazar and Ithamar, Aaron’s sons. You shall make holy garments for Aaron your brother, for glory and for beauty.

We see that he wore a breastplate that carried the names of the tribes of Israel close to his heart:

We see that he wore a turban on his said that had written across the front “Holy to the Lord”:

You shall also make a plate of pure gold and shall engrave on it, like the engravings of a seal, ‘Holy to theLord.’

We discover that the high priest had to be washed with water:

Then you shall bring Aaron and his sons to the doorway of the tent of meeting and wash them with water.

The high priest had to be anointed with oil:

and you shall anoint them even as you have anointed their father, that they may minister as priests to Me; and their anointing will qualify them for a perpetual priesthood throughout their generations.

The high priest was responsible for making the offerings:

He shall slay the young bull before the Lord; and Aaron’s sons the priests shall offer up the blood and sprinkle the blood around on the altar that is at the doorway of the tent of meeting.

The high priest was the only one allowed behind the veil:

When he goes in to make atonement in the holy place, no one shall be in the tent of meeting until he comes out, that he may make atonement for himself and for his household and for all the assembly of Israel. 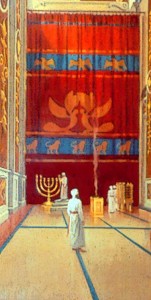 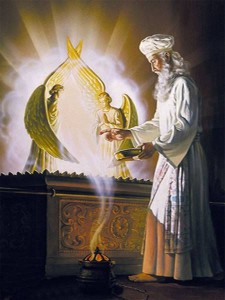 As we look at the Aaronic priesthood do you see the picture of our Archiereus being so clearly displayed before us? think of all that Christ experienced when He was here on earth among us… He put on this garment of flesh… He was washed with the water in the Jordan river… He was anointed with oil from a woman’s alabaster vial of perfume… He  carried the sins of the people on his heart… His mind, every thought, was Holy to the Lord… He not only made the offering  for the sins of the people of Israel and the world, but He was the offering.

However, our Archiereus is so much more!

For every high priest taken from among men is appointed on behalf of men in things pertaining to God, in order to offer both gifts and sacrifices for sins; he can deal gently with the ignorant and misguided, since he himself also is beset with weakness; and because of it he is obligated to offer sacrifices for sins, as for the people, so also for himself. And no one takes the honor to himself, but receives it when he is called by God, even as Aaron was. So also Christ did not glorify Himself so as to become a high priest, but He who said to Him, “You are My Son, Today I have begotten You”; just as He says also in another passage, “You are a priest forever According to the order of Melchizedek.” In the days of His flesh, He offered up both prayers and supplications with loud crying and tears to the One able to save Him from death, and He was heard because of His piety. Although He was a Son, He learned obedience from the things which He suffered. And having been made perfect, He became to all those who obey Him the source of eternal salvation, being designated by God as a high priest according to the order of Melchizedek.

Our High Priest is flesh and blood so that He might be able to sympathize with us, but He is not like the high priest of before, for He never had to make sacrifices for His own sin… The Scripture in Hebrews said that He had to be made perfect… but we know that Jesus was always perfect.

Made in the Greek is teleioo and it means: to make perfect, complete, to carry through completely, to accomplish, finish, bring to an end, to complete (perfect), add what is yet wanting in order to render a thing a full, to be found perfect, to bring to the end (goal) proposed, bring to a close or fulfillment by event of the prophecies of the Scriptures.

Therefore when Jesus had received the sour wine,

And He bowed His head and gave up His spirit.

Now the main point in what has been said is this: we have such a high priest, who has taken His seat at the right hand of the throne of the Majesty in the heavens, a minister in the sanctuary and in the true tabernacle, which the Lord pitched, not man. For every high priest is appointed to offer both gifts and sacrifices; so it is necessary that this high priest also have something to offer. Now if He were on earth, He would not be a priest at all, since there are those who offer the gifts according to the Law; who serve a copy and shadow of the heavenly things, just as Moses was warned by God when he was about to erect the tabernacle; for, “See,” He says, “that you make all things according to the pattern which was shown you on the mountain.” But now He has obtained a more excellent ministry, by as much as He is also the mediator of a better covenant, which has been enacted on better promises.

We were justified by His sacrifice and we are being made into His likeness and as we go and as we are molded He is there along side of us all the way… By His grace we are saved and by His grace He keeps us saved until one day we step out of this corruptible flesh.

The One who is both King and Priest.

Our All in All.