Furthermore, I have seen under the sun that in the place of justice there is wickedness and in the place of righteousness there is wickedness. I said to myself, “God will judge both the righteous man and the wicked man,” for a time for every matter and for every deed is there. I said to myself concerning the sons of men, “God has surely tested them in order for them to see that they are but beasts.”
Ecclesiastes 3:16-18

Are we ready to cry out yet?

Not are we ready to spew our venom in the world of social media, but are we ready to cry out to our God in repentance for forgiveness? I don’t mean those that are advocating and celebrating the latest American news story of the nationwide forced recognition of same-sex couples as legally married, nor do I mean those who are vehemently outraged and letting us all know it.

But he who practices the truth comes to the Light, so that his deeds may be manifested as having been wrought in God.

Daniel prayed and remained a man of high esteem.

Isaiah spoke and continued to prophesy.

Jesus longed to forgive, restore, and comfort and died so that He could.

I don’t want to “take my country back“.

I want to see His Kingdom come.

O Lord, my heart is not proud, nor my eyes haughty;
Nor do I involve myself in great matters,
Or in things too difficult for me.
Surely I have composed and quieted my soul;
Like a weaned child rests against his mother,
My soul is like a weaned child within me.
O Israel, hope in the Lord
From this time forth and forever.

This is the Scripture that came to my heart the moment I heard the news of the turn in our nation. This matter is too great for me. It is too difficult for me. There is no platform on which I have to stand to make anyone listen. What I do have is the peace that God is still on the throne. What I do have is the opportunity to rest in the Lord and to make certain that I am not deceived, but choose to believe the Word of God.

My heart grieved when I opened my email to see this message from whitehouse.gov in my inbox. 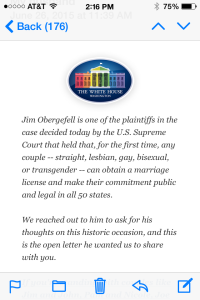 It was the picture of the rainbow White House that made my heart flip. Our entire nation before a watching world has just been defined by sexual preferences… as though this is all our nation is about. A nation that once was defined by her fervor to throw off the bands of tyranny has appeared to become a tyrant to her own. A government that was designed to be ruled by the people now ruling the people.

And we use the term “freedom” to validate it all. Now I wonder where will this stop?

Will this cause His people to become serious about their Father’s business?

Will this cause His people to cry out?

It’s a sad day. I am not even sure how to put into words the depths of the sorrow I feel, but at the same time I also feel this angst of anticipation that perhaps His coming is drawing nigh. Yet, I think we are simply seeing the beginning of what is to come.

My heart breaks in regard to our President, especially when I hear him slinging the word grace around as if he actually knows what it means. I hope that he is clueless of the blood that is on his hands. I hope that he does what he does because of the depth of the depravity of his soul and not because he purposes the destruction of the nation that he leads. The seduced one seduces others and the deceived ones deceive many.

But they did not listen, and Manasseh seduced them to do evil more than the nations whom the Lord destroyed before the sons of Israel.

Thus Manasseh misled Judah and the inhabitants of Jerusalem to do more evil than the nations whom the Lord destroyed before the sons of Israel.

The Lord spoke to Manasseh and his people, but they paid no attention. Therefore the Lord brought the commanders of the army of the king of Assyria against them, and they captured Manasseh with hooks, bound him with bronze chains and took him to Babylon. When he was in distress, he entreated the Lord his God and humbled himself greatly before the God of his fathers. When he prayed to Him, He was moved by his entreaty and heard his supplication, and brought him again to Jerusalem to his kingdom. Then Manasseh knew that the Lord was God.

The political, educational, and spiritual choices of Manasseh carried on long past his reign. Even though Manasseh was brought to individual repentance and received the grace and mercy of God, his past actions would be the destruction of his nation. Yes, years would pass, and even times of revival would come, but God’s promise of judgment would not be forgotten.

I will make them an object of horror among all the kingdoms of the earth because of Manasseh, the son of Hezekiah, the king of Judah, for what he did in Jerusalem.

Manasseh did not have a camera on him that made his actions visible to an entire watching world. President Obama does. I don’t believe he realizes… for the sake of his eternal soul… I hope he does this out of ignorance and delusion. (However, it appears to me that he quotes, or misquotes, way too much Scripture to play the ignorant card, yet I suppose so did Saul of Tarsus before he saw the Light.)

Obama’s sphere of influence stretches far beyond our nation, thus so does his accountability before a holy God. He has much more to be concerned about than poll results.

If anyone hears My sayings and does not keep them, I do not judge him; for I did not come to judge the world, but to save the world. He who rejects Me and does not receive My sayings, has one who judges him; the word I spoke is what will judge him at the last day. For I did not speak on My own initiative, but the Father Himself who sent Me has given Me a commandment as to what to say and what to speak. I know that His commandment is eternal life; therefore the things I speak, I speak just as the Father has told Me.”

The popular phrase “only God can judge me” is a terrifying thing to me. He can indeed judge and He will. Sadly those that use this as their motto seem to not understand that Jesus came so that we didn’t have to be judged by God… because apart from Christ there is no way we can be saved from His judgment which will come with the full extent of the law, that law being His Law not our own, and not our interpretation of His Law.

However, until that time when He judges the earth how shall we who love Him respond?

It is really quite simple…

So then, my beloved, just as you have always obeyed, not as in my presence only, but now much more in my absence, work out your salvation with fear and trembling; for it is God who is at work in you, both to will and to work for His good pleasure. Do all things without grumbling or disputing; so that you will prove yourselves to be blameless and innocent, children of God above reproach in the midst of a crooked and perverse generation, among whom you appear as lights in the world, holding fast the word of life, so that in the day of Christ I will have reason to glory because I did not run in vain nor toil in vain.

But the seed in the good soil, these are the ones who have heard the word in an honest and good heart, and hold it fast, and bear fruit with perseverance.

Don’t allow this to cause you to live out the deeds of the flesh, which are: immorality, impurity, sensuality, idolatry, sorcery, enmities, strife, jealousy, outbursts of anger, disputes, dissensions, factions, envying, drunkenness, carousing, and things like these,  because we have been advised and warned that those who practice such things will not inherit the kingdom of God (Galatians 5:19-21).

Be faithful in your own marriage. Be the spiritual heads of your own family. Be consistently involved in your own church and community. Be encouragers to your own children and to other children. Be diligent to pay your own bills. Hold fast your integrity and be men and women of high esteem. Do not be the reason that your family, your friends, your co-workers, your neighbors mock Jesus and His Church.

One thought on “Are We Ready To Cry Out Yet”